The therapeutic effect of light occurs thanks to the presence of endogenous molecules in an organism’s tissues that are capable of absorbing light. The energy conveyed by the light spectrum is absorbed by these naturally existing elements, known as “chromophores”, and is used to promote chemical reactions or produce conformational changes in certain biomolecules. This process translates into beneficial therapeutic effects such as reduction of pain and inflammation. The immunomodulation and induction of wound healing and tissue regeneration was defined as “Photobiomodulation” in 2014 by the North American Association for Laser Therapy and by the World Association for Laser Therapy at a joint conference.1

EmoLED is a medical device for photobiomodulation that uses visible light with wavelengths within the blue spectrum (400-430 nm). Its mechanism of action can be explained by the absorption of blue light by certain electron transport chain molecules and flavoproteins.

The electron transport chain includes Cytochrome C and Cytochrome C Oxidase, haemoproteins sensitive to blue light due to containing Protoporphyrin IX, the chromophore with an absorption spectrum peaking at around 410 nm.

Once activated by the blue light, Cytochrome C and Cytochrome C Oxidase contribute to enhancing the cellular respiration process and then to increasing the production of ATP. This brings about an increase in the energy available to cells, which can intensify their metabolic activity. 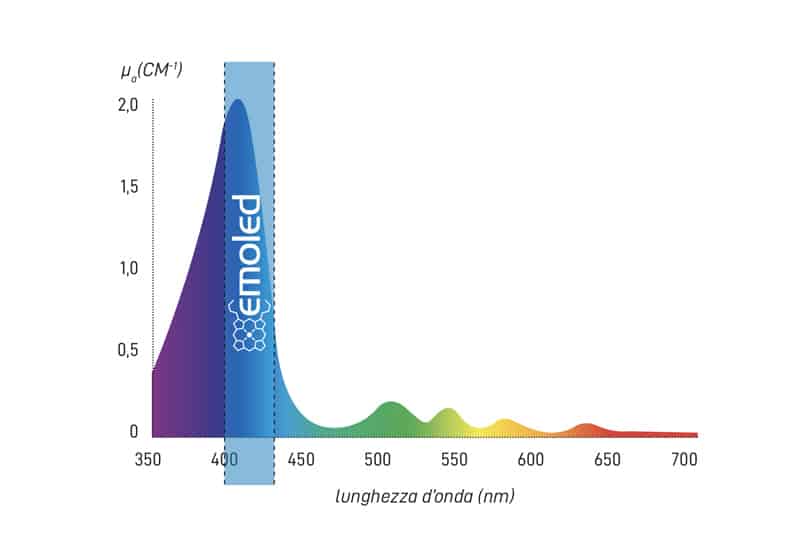 In preclinical studies, a more rapid transition has been observed in the inflammatory phase in treated wounds compared to those not treated. Clinical studies and observations have recorded that irradiation with blue light stimulates ulcers to overcome inflammatory stasis. This positive action can be explained with the absorption of light by Flavins which, once excited, increase the production of ROS, signal transducers of the numerous cellular pathways involved in tissue repair. The increase in ROS may stimulate the production of pro-inflammatory agents; in addition, via the action of the T lymphocytes found in the wound bed, ROS are able to promote the phenotypic transition of the macrophages from M1 (pro-inflammatory) to M2 (pro-healing). These effects reported in the literature suggest that the irradiation causes an increase in inflammation such as to induce the body to produce a consistent response, stimulating the transition to the subsequent healing phases.

The increase in ROS resulting from the irradiation of the tissue may also contribute to the promotion of angiogenesis. One effect of ROS reported in the literature is the production of HIF-1α (Hypoxia-inducible factor 1-alpha), a factor that promotes angiogenesis, increasing nutrition intake and oxygen into the wound bed, by releasing pro-angiogenic factors such as VEGF (Vascular Endothelial Growth Factor) and by the induction of eNOS (endothelial Nitric Oxide Synthase). 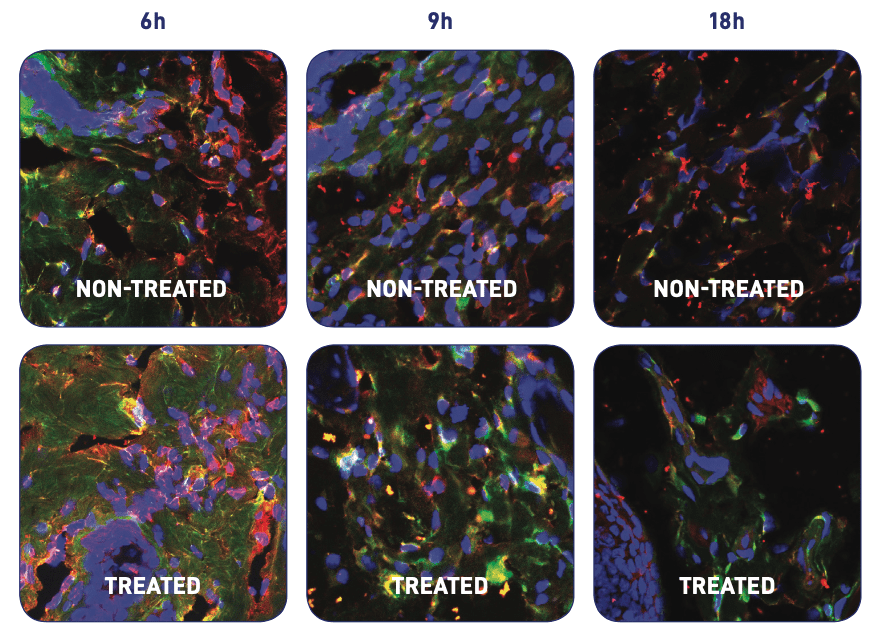 In preclinical studies, blue light has demonstrated modulating the activity of Fibroblasts, extracted both from healthy skin and from keloids. Fibroblasts are the primary type of cells involved in the deposit of extracellular matrix and collagen during the remodelling phase. Their hyperactivity can be the cause of the formation of abnormal scarring following abrasions and wounds (keloids).

Studies have shown that the metabolism and proliferation of these cells are increased or, alternatively, inhibited, depending on the dose of light used for irradiating them. In an animal model, better results in terms of organisation and morphology of collagen in wounds treated with blue light have been found compared to control.

ANIMAL MODEL OF ACUTE WOUND DISTRIBUTION OF COLLAGEN
Collagen (in blue) an extracellular matrix (in green) in animal model of acute wound at eight days following the lesion: comparison between treated and untreated. The distribution and morphology of collagen (type I) were better in the treated wound. Source: Cicchi R et al. Observation of an improved healing process in superficial skin wounds after irradiation with a blue-LED haemostatic device. J. Biophotonic, 2016

Discover how to deliver EmoLED therapy

What’s the Difference Between InterX and a TENS?

Unsure If Lunula Is Right For You? Trial It With Us

Why does my wrist hurt? Have I got a Repetitive Strain Injury (RSI), Carpal Tunnel syndrome, or Arthritis?

What Is The Most Effective Treatment For Fungal Nail Infections?